Inline stats allow you to quickly assess the performance of the blocks and flows in your chatbot.

Written by Edgar
Updated over a week ago

This feature is a no-code solution. 🍰

Inline stats display performance statistics based on how many users have seen a given block, and what percentage of users have clicked on elements, controls, buttons, etc. within that block.

What inline stats is

This lets you quickly determine which flows are getting the most traffic and what level of interaction each block is driving.

How does it work

There are two stats shown under each block:

💡 Tip: The click-through stat shows up as a percentage of total viewers by default. If you wish to see the absolute number of people who clicked on an element within a given block, simply hover over the click-rate percentage, and this number will be displayed in a tooltip.

Additionally, if you wish to simplify your view of a given group of blocks, click the hide stats text at the top of the group. This will hide the performance statistics for that particular group.

Use inline stats to segment users

In addition to viewing the performance statistics of the various blocks in your chatbot, you can also use inline stats to quickly segment users who have viewed or clicked a given block. To do so, click on the view- or click-rate value under a block. This will redirect you to the People tab, which will have a filter set for that particular group of users.

Flow Builder offers native statistics for different elements of your flow. That way, you can see how each card is performing, so you can optimize for best results. You'll find four stats at the top of each card: 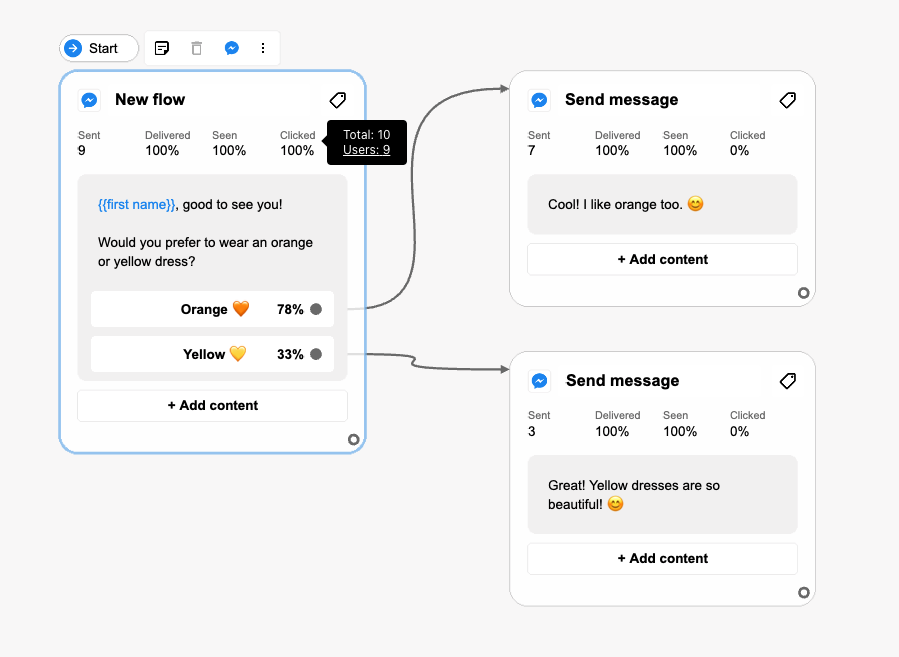 💡 Tip: To get precise numbers (instead of percentages), hover over one of the stats and a tooltip with this information will appear.

A few details about how stats will appear:

❗Note: Due to Facebook's December 16, 2020 policy changes in response to EU privacy laws, the Seen stat will always be blank for pages that are based in or have admin(s) based in affected European countries.

If you notice a drop from one card to another or want some tips for connecting your flow, visit our Flow Builder Basics article.