All Collections
Basic Building Components
What's the difference?
The Difference Between Buttons and Quick Replies

The Difference Between Buttons and Quick Replies

Buttons and quick replies give the user options for moving the conversation along, and they allow your chatbot to save user information.

Written by Angela Skowronek
Updated over a week ago

Buttons and quick replies are fundamental elements for basic bot building. You'll find them in most every Messenger chatbot. They represent options for how the user can respond to your chatbot's messages. When clicked or tapped, they can lead users to wherever they may need to go based on their response, whether it's some other part of the bot or an external source.

You can add artificial intelligence (AI) to your bot so it can understand free-form user input, too. 🤖 But it's best practice to still set up buttons and/or quick replies throughout the flow, as they help keep the conversation on track and therefore create a better user experience. Your bot can also gather helpful information about users based on which buttons or quick replies they select.

Though buttons and quick replies are designed to accomplish the same goal, they have different characteristics and uses. This article will help you decide which one to use in your chatbot and when.

Buttons appear in a vertical stack under a text card. You can have up to three buttons per text card. You'll see the option to add a button directly under any text card in the Automate tab.

You'll need to create text for each button, which is what the user will see. You're limited to 20 characters for each. You'll also need to choose where to send the user when they click each button. You can:

In the example below, the View store hours option redirects to a block called store hours. The Get directions option will send user to the URL listed there. The Contact us button will dial the phone number listed once the user taps to confirm. (Note that the gray text below that lists the destination of each button will only appear to you, the builder, and not to the user.) 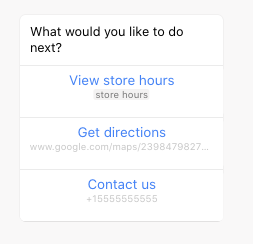 Note: If your page or its admins are based in certain European countries, or any of your users are, buttons won't be available in ads (use quick replies instead). Learn more about Facebook's updated policies for Europe.

You can also use buttons to track user activity in your Messenger chatbot, thanks to a feature called Button Actions. Set them up in the menu where you set up the button name. 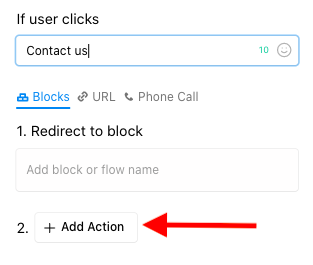 A Button Action will tag users based on the buttons they click. If a user clicks a button that leads to a URL, for example, you can set them up to be automatically tagged as such. That way, you can set up custom follow-up messages based on that website. You can also use this feature to see which of your users are most engaged in the conversational flow, which is helpful for future retargeting via Facebook ads. Learn more about Button Actions and their uses.

What are quick replies?

You'll see the option to add one or more quick replies from the Add Element menu in the Automate tab.

Quick replies also allow users to choose from multiple response options that will move the conversation along, just like buttons.

And just like buttons, you can use quick replies to gather helpful information about users too. You can have your bot automatically add a user attribute (like a tag) to a user based on which quick reply they choose from a set.

You can view all your chatbot's users and any attributes, or tags, applied to them in the *People* tab. You can sort them into segments via attributes there too, and even export or sync those segments to Facebook Ads Manager. It's a great way to follow up with chatbot users later based on how they behaved in your bot, or the information they shared with it.

💡 Example: Let's say that a chatbot for a skincare company asks the user if they have dry, oily, or sensitive skin in its product-recommendation flow. Your bot can save the user's response to an attribute called {{skin type}}. Then, when you release a new product specifically for sensitive skin types, let's say, you can segment out only the users who chose that option, and send them a message.

Differences between buttons and quick replies

The main differences between these two elements are:

What if users type in a response instead of selecting a button or quick reply?

As mentioned above, you can incorporate artificial intelligence (AI) into your chatbot to help it handle free-form user responses—that is, when a user decides to type in their own response to your bot instead of choosing a button or quick reply option. You can set up (no-code) AI rules in the AI tab.

And what if a user sends a free-form response instead, when you offered them quick replies that were supposed to save their choice to a user attribute? 🤔 If the Text replies processed by AI switch is toggled on, AI will process these replies but they will not be saved as attributes. Toggle the switch off if you still want to save the user's free-form input to an attribute. (The switch will appear whenever you add a set of quick replies.)